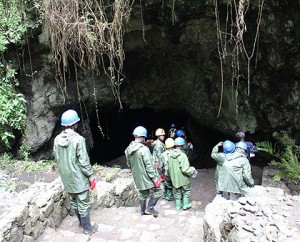 The Rwanda Development Board (RDB) has embarked on an exercise to transform a famous cave in Musanze district into a tourism site.

Tour operators at the cave’s entrance

This was disclosed by Rica Rwigamba, the head of Rwanda Tourism and Conservation at RDB, while touring the site together with tour operators to assess the progress on Friday. Located in Musanze district, the decades-old cave is about 2km. She said works are already ongoing.

A meeting between tour operators and the department of tourism and conservation is scheduled next month to seal the cooperation to promote the place as a tourist site.

“We have been planning this for a while, our target is to increase tourism products; caves are part of products attracting tourists next to mountain gorillas. We want to discuss with tour operators to help us let tourists know about our new products,” said Rwigamba, adding that within a month, they will announce the price of touring the cave after the consultations with tour operators.

Rwigamba also urged local leaders to help in conservation of the cave by preventing people from dumping wastes or anything which can pollute in the cave.

So far, the inside of the dark cave depicts a picture of a house with several rooms and corridors. The floor is paved and there are some stairs to ease movement.

The cave is said to have been a result of volcanic eruption decades ago. Residents said they expected the cave to benefit them because they will get jobs.

“The cave has been lying idle for years. Now people have started benefitting from it, some are guides there, others are cleaners, we hope as tourism grows more people will get employed,” said Pacifique Nshimiyimana, an area resident

Tourism was identified as a priority sector to achieve Rwanda’s development goals as set out in Vision 2020.

The cave is the newest tourism product in Rwanda; with plans to turn several other caves into tourism sites in the future, according to officials.