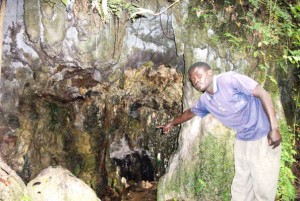 A tour guide points at the stalactites that are famously known as Amabeere ga Nyina Mwiru.

Amabeere ga Nyina Mwiru has become one of the famous tourist attractions in Kabarole and you can get both scientific and cultural explanations of how the breastlike features came to be.

One would say they are the ultimate tourist attraction because they are the breasts of a princess, at least according to history. Just like in real life, these so-called breasts are not in the open for all to see, so you will have to clear a few shrubs and take care when descending down the caves with the breast-like stalactites. They are known as Amabeere Ga Nyina Mwiru, translated, to mean the breasts of the princess (Nyina Mwiru).

They are located in one of Fort Portal’s caves, about 8km from the town itself, and just after the traditional Nyakasura School.

The compound to the caves opens up to beautiful open grassland where you can freely play football, volleyball or simply sit and talk. This is at Rubombora compound which also doubles as a camping site where tourists who would like to spend a night or more, stay.

It is from here that the guide will take you through the history of the place before giving you the two versions of the story, the cultural or traditional tale and then the geographical one. He lets you choose which version of the explanation you would find convincing to go with.

As you get educated about the history of Amabeere Ga Nyina, there are the cows “mowing” as they shorten the grass and mulch it at the same time. Three cattle paddocks lead to the rocks and caves.

Here, in the compound, you will be given bamboo sticks to help you as you descend into the caves that are chilly and soggy almost all year round.

“We try to preserve nature as much as possible, so you will be using these bamboo sticks to clear the way,” Wilson Insingoma, one of the tour guides, explains as he leads the way in this historical site located in Bukuku Sub-county.

“Please, be careful,” he cautions us, as he tries to clear the way. This is a dream come true for a first-time visitor, my friend Claire who thought the marvel that is the two sprawling hills was all the beauty King Oyo’s kingdom had. On one hill is His Majesty’s (HM) palace and on the other, the great Ruwenzori Mountains. Soon, the falls underneath, in the caves, can be heard roaring in a distance. At this point, the excitement to see the falls comes calling and so the tension and fear to fall should one slip.

Isingoma comforts us and we are soon down at the caves which hardly see the light of the day as sunshine hardly sips through the shrubbery cover. The chill is real and as the Nyakasura Falls pour out powerfully, they create a fog. When I put my hand out so I can taste the water, it is salty.

Isingoma is willing to share his knowledge that explains the geographical version of the formation of these “breasts” or should I say, stalactites.

“They contain calcium. The water flows from the Rwenzori Mountains and meanders at Kamutebe wetland and then to a number of rivers like Nyakaswa River, which pours its waters into River Mpanga near Fort Portal town.

From there, it flows to Kamwenge District, where it connects to Kasese through Lake George,” he explains pointing at the breast-like features. He immediately cautions us not to touch them as this slows down their growth.

“They grow slowly, one inch in years,” he explains causing laughter from a tourist. The breasts have a cream-like substance on their top that looks like milk.

Down here, the historical or cultural version is sweet to hear. You will be reminded of the Social Studies lesson in which you were told of a legend in which King Bukuku, one of the last kings of the Chwezi cut off his daughter’s breasts to stop the prophecy in which a fore teller warned Isaza that this lady would give birth to a man that would dethrone him.

The legend has it that Nyina Mwiru was secluded from the public for fear of getting in contact with a man but then fell in love with one of the palace porters and married him in a secret ceremony. When the king learnt of it, he cut off his daughter’s breasts, and had them thrown into the caves.

Years later, Nyina Mwiru conceived and gave birth to Ndahura, who killed Bukuku and took over his throne, fulfilling the prophecy.

The geographical version though, explains these features as, “When these drip onto the rock floor, they thus form stalagmites. When stalactites and stalagmites start joining, they form pillar-like protrusions over the years,” Isingoma adds.

If your eye is not caught by the sight of these stalagmites then it will be the water falls or simply nature which Isingoma says, has its source in the Rwenzori Mountains.

The river then flows into the Kamutebe wetland and drains into a number of rivers such as the Nyakaswa, which drains into River Mpanga near Fort Portal town.