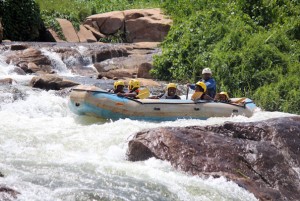 Water rafting on the Nile is one of the most exciting activities in Uganda.

Having had a great year of tourism in 2012, players in the tourism industry are optimistic about 2013. With marketing strategies being formed for both domestic and foreign tourism, all eyes are on Uganda’s natural heritage sites like Bwindi National Park which habits half of mountain gorillas in the world, the Rwenzori National Park which has introduced new Mutoma walking trail, the Kasubi tombs which is the biggest grass hatched house in the world.

The year Uganda’s tourism industry shone can best describe 2012. In December, Uganda was voted in the top 10 must-see places in 2013 by MSN, Microsoft’s leading internet portal, in which Mweya Safari Lodge was featured.

It states, “Although its name has become synonymous with brutal dictators and civil strife, this is a nation on the rise, a place that has more recently boasted a stable regime and rising prosperity.”

It adds, “It is also a country filled with some of the most stunning beauty on the globe, from the headwaters of the Nile, which roar over mighty Murchison Falls- to the peaks of the Rwenzori Mountains, some of the highest in Africa.”

And while MSN went on and on about Murchison’s beauty National Geographic in this same month, recognized Uganda as a home to some of the few remaining, majestic mountain gorillas, which can be seen (by special permit) at the Bwindi Impenetrable National Park.

Queen Elizabeth National Park, National Geographic notes, is home to lions and a wide array of other exotic wildlife. Head there and go on safari at a place like the Mweya Safari Lodge, where you can watch hippos in the Kazinga Channel from the comfort of your room.

CNN International, the leading global all-news network in December last year, also picked Kidepo Valley National Park as the third park among Africa’s 10 best national parks because it is where you would go to for all your adrenalin-producing needs.

“Best for: Spectacular landscapes and great buffalo herds,” CNN explains in its appreciation, adding that Kidepo has sprawling savannah and soaring mountains and might be the most picturesque park in Africa.

“Those who take the trouble to get here are rewarded with phenomenal wildlife sightings and a level of exclusivity that can rarely be had at any cost in neighboring countries,” the story says in part.

This presents a good opportunity, which according to Amos Wekesa; managing director of Great Lakes Safaris, Uganda should have used to its advantage and driven a spirited marketing campaign.

“We have enjoyed a number of accolades and recognitions and as a country we needed to take advantage of this to go strong on marketing especially when our parks get recognized. Then we also lacked a communication strategy when we were hit by Marburg and Ebola. No one engaged international media. We should have gone out to CNN, Al- Jazeera to tell them Uganda was safe. You don’t know how many cancellations were made,” Wekesa argues.

Uganda Wildlife Authority (UWA) Public Relations Manager, Lillian Nsubuga agrees and says that as the main vanguard of tourism in Uganda, UWA will endeavor to continue developing new tourism products so that tourists have a reason to stay longer in the national parks.

She explains, “In 2012, Experiential Tourism was launched while plans for implementing bird watching activities went into top gear with a series of joint training in bird guiding with the Uganda Bird Guides Association. UWA will also be introducing hot air balloons and a canopy walk. Several other options for new products are being studied and will be made public at the appropriate time.”

This all comes at the backdrop of a year that began on a high with Lonely Planet, one of the biggest and oldest online guidebooks for travelers, naming Uganda as the best tourism destination.

And soon, as Nsubuga notes, suddenly all of the eyes were turned to Uganda and tourists began considering it for their next holiday destination.

“It was a great opportunity to showcase our natural heritage especially the mountain gorillas. Delegates from many countries visited the gorillas and these included Sweden, Norway, Portugal, Switzerland, Mexico, Australia, United Arab Emirates, United Kingdom, Canada, Hungary, USA, Finland and Qatar,” she adds.

Uganda aggressively participated in two of Europe’s biggest travel fairs – ITB in Berlin and WTM in London. In Berlin, Uganda was voted third best exhibitor in the African region, which was a new achievement.

The chairman at Association of Uganda Tour Operators, Boniface Byamukama, notes that this enabled them to plan as a sector to reap from these accolades.

“We are working with the minister and have a plan for 2013. We are going to exhibit in Berlin in March, we will be in Madrid in February for yet another exhibition and in Holland later in January,” Byamukama spells out a plan to exhibit Uganda’s tourism potential to the world in the first quarter of 2013.

He adds that the ministry has earmarked tour operators for training. Today there are about 130 tour operators registered under the Ministry of Tourism, a sharp rise from about 80 two years back.

Nsubuga reveals some of the ministries’ plans for 2013. “UWA will also be extremely aggressive in fighting poaching in the national parks especially of elephants. An Intelligence Unit that will be manned by 80 rangers will soon be set up, and these will be allocated to the different national parks. Their main job will be to gather useful intelligence that will help us in planning for security interventions,” the authority’s publicist discloses.

She adds that new tourism markets will be sourced. “Currently, most of our marketing is done in Europe. We will look at beginning to carry out marketing in Asia, Australia and America, plus, increasing domestic tourism will also be a major objective for 2013,” she further reveals.

Currently, most of the Ugandans who visit the national parks are students but UWA will now target the corporate world through tailor-made tour packages for government agencies, international organizations and non-governmental organizations.